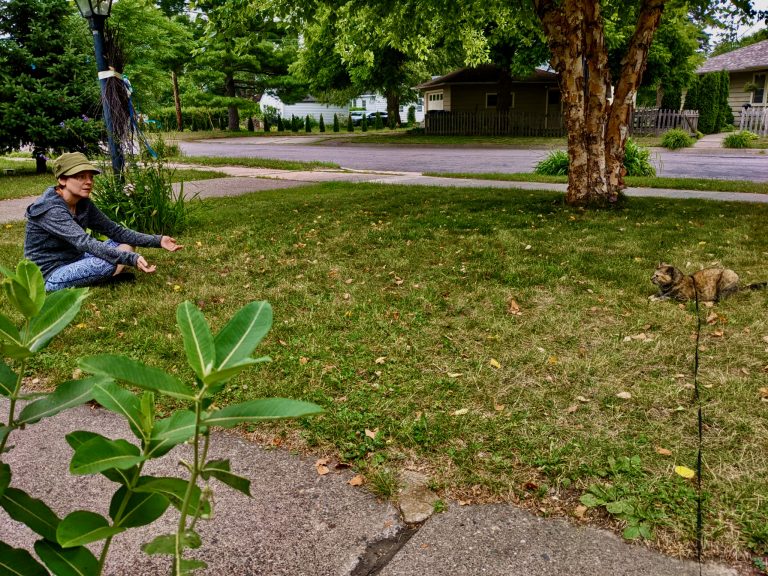 Reiki is a gentle and non-invasive energy modality that can compliment your companion animal’s regular care. It can be used to help animals feel more at ease in times of stress, reduce anxiety or depression, manage pain, resolve symptoms of physical and emotional trauma and quell tensions between animals in the home (introducing a new animal can be stressful for all involved).

I offer in-home, outdoor or virtual sessions for caregivers and their companion animals. It’s hard to determine how long a Reiki session will last, so I charge a session fee instead of an hourly rate. Much like my services for humans, Reiki for companion animals is based on consent. If I get the feeling that the animal does not want Reiki, I will honor the animal and talk with the caregiver about our next steps. That being said, most animals love to receive Reiki. I have two cats and a dog at my house and all of them will come to me for Reiki when they want it (they ask with a look or a specific body position near my hands). My cats, Cinnamon and Peppercorn, have also been attuned to Reiki, so they actually give Reiki to our whole family. They sometimes show up in my virtual client sessions to give Reiki or support to my human clients, which is always a treat. I am an Animal Reiki Master, so I am also able to attune animals to Reiki, and as a Karuna Reiki Master, I can offer combination sessions for caregivers and their animals.

In regards to End of Life services, I am an INELDA-trained Death Doula, and while the training was for humans and not animals, I feel called to support and hold space for animals and their caregivers. Sometimes a diagnosis takes us by surprise or our beloved pet dies suddenly, leaving us with a deep grief. I can be present when an animal is actively dying, or hold space for the caretakers to process the loss after the death. Reiki can also help an animal cross “the rainbow bridge” and bring a sense of peace to a room if a pet is being euthanized. As humans, we have a very unique and special relationship with the animals in our lives. They offer us unconditional love and physical touch and communication that we don’t easily find with other humans. It is from this place of love and understanding that I offer my support, unconditionally.

If I am sending Reiki virtually, we can set up a Zoom or FaceTime meeting and you will just need to have a camera available so I can see your animal. I can also set up a time where I send Reiki without seeing you or your animal. We’ll usually check in before and after the session, so we can exchange perspectives on the session. In-person sessions are a little different and most of the time there is no actual touch involved. The photo at the top of this page is of me giving Reiki to my neighbor’s cat, who has plenty of space to move around. It’s important to note that the Reiki is still flowing/working if your animal is moving around – they don’t have to be sitting or lying still. There is no right or wrong way for a session to go. It just is.

I am not an animal communicator and Reiki is complimentary to your regular veterinary visits and animal behavior trainers. That being said, I have seen Reiki help animals with anxiety, adapting to new circumstances, end of life transitions, pain, illnesses and grief.

If you’re interested in a session, please fill out the Reiki Form for Animals

The Story of Morris

My path to Animal Reiki begins with my dog, Morris. He’s a thirteen year-old chihuahua mix who has struggled with anxiety his entire life. Summer has always been particularly stressful because the vast majority of thunderstorms and fireworks occur then. After years of attempting to help Morris with his anxiety in natural ways (oils, thundercoat, avoiding the Twin Cities during big holidays), we ended up medicating him. Not long after we introduced anti-anxiety medicaitons, Morris developed late-onset epilepsy (grand mal seizures). Over time, we started to notice that he would experience cluster seizures with road trips, full moons (no joke) and when the humans in the house were experiencing a lot of anxiety. Despite his epilepsy medication and anti-anxiety medications, he continued to have these flare-ups and cluster seizures.

About a year after his diagnosis, I took my first Reiki course and immediately felt the impulse to practice on Morris. I knew that my training wasn’t specifically tailored to animals, but it felt right. We noticed improvements immediately. I started to give Morris Reiki while he was having a seizure and he would seem to come out of his daze much more alert and aware. In the beginning, it was emotionally difficult for me to hold space as Morris had his seizure, but I realized that he just needed a loving presence in the room. Our sessions became a routine, and shortly thereafter, he would back up into my hands whenever he wanted energy work. It was absolutely beautiful.

Morris continued to have his seizures, but we started to understand his rhythm and I would tailor his Reiki sessions to times of stress. This past Spring (2021), however, he experienced an unprecedented flare. We had just returned home after a three-hour drive from our cabin, when we noticed that Morris was acting strangely. Over the course of a couple of hours, he went from our normal dog to being completely incapacitated. He struggled to stand, walk, eat or drink water. At first, we just thought it would pass, but the following day was worse. He lost control of his bladder/bowels and was completely unable to stand up or move.

Due to the pandemic, most of the vets in our area had restricted their hours and were perpetually full. I called every vet and animal hospital in the metro area numerous times and there wasn’t any room for him. After a particularly frantic call with a nearby vet, I convinced them to make space for Morris. I had to wait with him in a freezing cold room for hours, but it was our only option. When the vet finally came in after examining Morris, I could tell that she had bad news. She rapidly stated facts about his situation (a neurological origin that most likely wouldn’t remedy itself) and offered to keep him at the clinic for his last days. As a trained Death Doula, I immediately told her that it would not be necessary and that I was completely capable of taking care of Morris. I couldn’t imagine leaving him with strangers in that cold place.

I drove home, sobbing, wondering how to tell my kids that our dog didn’t have much time left. The vet gave me a prescription for gabapentin (nerve pain) and prednisone (a steroid to help with the flare) and wished me luck. While I didn’t know how it would help, I made a commitment to give Morris Reiki as often as I could.

After an incredibly emotional conversation with my partner and kids, we came to a place of acceptance. From that place, my youngest child made the request that we continue to bring Morris on walks, even though he could no longer walk. By the end of the evening, we had found a neighbor who was willing to loan us their Red Flyer wagon so we could continue our nightly tradition. Since Morris was incontinent, I had to figure out a diaper solution to keep him comfortable. There are no good diaper solutions for dogs, by the way. I tried various brands and styles and nothing worked – it was incredibly frustrating. So, after brainstorming for a bit and recalling the cloth diapers I used to put on my kids, I created a diaper system that seemed to work for Morris. I also invested in four or five non-slip rugs that we could wash easily. It was early summer, so we were able to carry Morris outside and let him lie in the grass for extended periods of time. It wasn’t a perfect solution, but we made it work.

My kids really started to shift their relationship to Morris once we started talking about his remaining time earth-side. Both of them started to sit with him, feed him puppy ice cream and create art about their experience. On a day that was particularly heavy, we purchased some air dry clay and made paw prints to keep after his death. I knew that our open and honest conversation was the best way for them to navigate the death of a treasured family member. He had been with us for their entire lives, and it was difficult to imagine a life without Morris.

The first few days were incredibly hard. Morris would make a terrible choking sound every time he would eat or drink, so I would alternate between doing some sort of Heimlich pressing on his abdomen and gentle stroking on neck. Once I moved past my own reaction, I was able to calmly sit with Morris and give him Reiki. As a few days went by, Morris seemed to shift a little bit. He was  more alert and was able to eat food without choking every time. He also started to stand up during his wagon rides around the block, which we just laughed about. Then, one day, Morris tried to get out of the cart and made motions to walk with us. We were really hesitant to take him out since he didn’t have his harness or leash on, but we figured he wouldn’t go far. Miraculously, he started walking and actually had control over his bladder. I’ve never been more excited to see a dog go to the bathroom outside in my life. And it just got better from there. By the end of the week, he was partially running and eating and drinking normally.

It has been seven months since Morris had his flare and we consider this our bonus time with him. His vet can’t believe that he’s still around and actually thriving. We have had multiple interactions with neighbors, assuring them that “yes, this is the same dog who was dying.” They all saw him when he was struggling the most, in a dog diaper and barely moving in the wagon.

Of course, I can’t say for certain that Reiki saved my dog, but I absolutely believe, in my heart and soul, that Reiki extended his life. I am ever grateful and look forward to the rest of our bonus time with the amazing Mr. Morris.